Get the most out of social creatives on DOOH

Get the most out of social creatives by using them on high impact DOOH screens on top of your social media campaign.

In Dr Martens first Dutch campaign they wanted to reach Free thinkers and the urban-minded. UM (Universal Media) therefore created a Social Media campaign to reach the 16-34 target group. To top this off Matterkind the addressable agency used the SAGE+ARCHER platform to add a DOOH + mobile flight, reaching this specific group.

The creatives were the trigger to add an extra layer to this campaign. With Out of Home increasingly turning digital, a lot of -already developed- creatives now suit the high impact outdoor screens seamlessly, an opportunity Dr Martens was keen to move into.

Hessel Viseer – head of addressable Matterkind: “There is so much attention in creating valuable, engaging assets for social media; it’s a great added value to have the speed (and agility) to adapt our social assets for the bigger (DOOH) screen.

With S&A we were able to efficiently add DOOH to our plan and extend our reach and recognition in a relevant environment for this specific target audience. DOOH will definitely be considered for upcoming campaigns!” 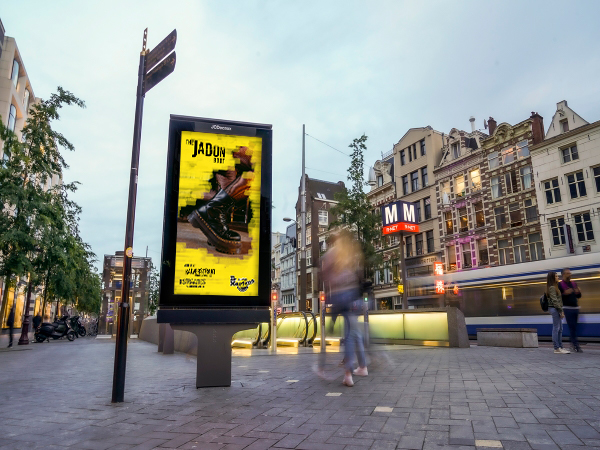 Even in current times a specific Out of Home plan can lead to higher visibility in the target audience, specifically for those Urban minded audiences. Targeting only those specific times and locations where the audience is ‘higher indexed, UM and Matterkind successfully reached youngsters with high impact ads.